What is Puppy Pyoderma? 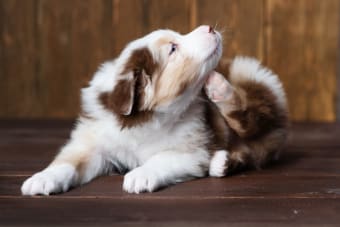 As a puppy ages and matures, their body and immune system become more adept at repelling invaders and managing commonly-encountered bacteria or irritants. In the early months of their life, however, puppies are susceptible to any number of serious or mild infections including puppy pyoderma. Here, our Torrance vets explain more.

Skin infections and irritation are relatively common in both pets and people. Generally speaking, they are caused by an excess of irritants on the surface of the skin that overwhelms the defenses of the skin against it becoming a health problem. The development of these health issues can be helped along by scrapes or scratches that break the barrier provided by our skin against bacterial or viral invaders.

What is pyoderma in puppies?

Pyoderma is one of these kinds of skin infections that, as the name suggests, appears in puppies. The main thing that sets puppy pyoderma apart from other skin infections is the time in your dog's life that it arises and the fact that it very rarely has any certain underlying cause - besides the immaturity of your dog's immune system.

There is always a natural and healthy amount of bacteria on any dog's skin that their body is able to keep in check. However, in puppies, especially before their full coat comes in and they still have significant hairless portions of their body. , their skin has a more difficult time regulating the amount of bacteria that can build up on it.

Because of this, any minor environmental change may be enough to kickstart the spread of bacteria like Staphylococcus intermedius, causing infections, discomfort and unsightly skin issues in young puppies.

What are the symptoms of puppy pyoderma?

Puppy pyoderma most often expresses itself as a minor skin infection. This means that the area around the infection may begin to develop pimple-like lesions or red bumps that over time may dry out into scaly skin and scab over. The infection will most often show up in sparsely-haired areas of your dog's body like their 'armpits,' their stomach and groin.

Puppies experiencing pyoderma will most show signs of being itchier than normal and, depending on the state of their infected skin, will probably be a bit uncomfortable.

How is pyoderma diagnosed in puppies?

Since these symptoms are pretty non-specific and are shared with nearly every other skin issue, if a veterinarian suspects that your puppy has pyoderma, they will need to run a number of diagnostic tests. These tests are generally conducted to rule more serious conditions out. If there is no obvious cause to your puppy's skin issues, then your vet will likely be able to determine that they have pyoderma.

These tests can include:

How is puppy pyoderma treated?

In most cases - which are mild - your vet may recommend a 'wait and see' approach. Pyoderma will often clear up on its own without the need for medical intervention.

If your vet recommends this course of action, you will need to make sure you closely monitor your pup's health for any changes.

If the case is more severe, however, continues to grow worse, or shows no signs of clearing up, your vet may recommend an antiseptic wash for the infected areas of your puppy's skin or topical antibiotics. In the most severe cases, oral and injectable antibiotics will be recommended to bring your young dog's infection under control.

Have you noticed a minor skin infection developing on your puppy? They may have pyoderma. Contact Torrance Companion Animal Hospital today to book your next appointment and learn more about how to treat your dog's skin infection.

We look forward to meeting your precious pet at Torrance Companion Animal Hospital.